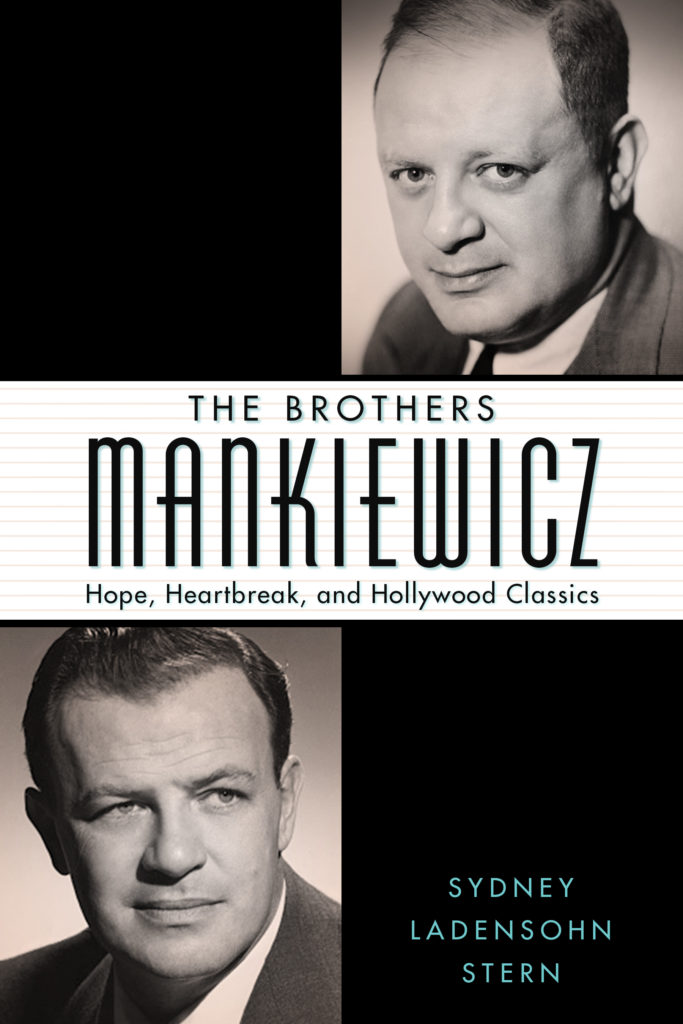 Herman J. (1897–1953) and Joseph L. Mankiewicz (1909–1993) wrote, produced, and directed over 150 pictures. With Orson Welles, Herman wrote the screenplay for Citizen Kane and shared the picture’s only Academy Award. Joe earned the second pair of his four Oscars for writing and directing All About Eve, which also won Best Picture.

Despite triumphs as diverse as Monkey Business and Cleopatra, Pride of the Yankees and Guys and Dolls, the witty, intellectual brothers spent their Hollywood years deeply discontented and yearning for what they did not have—a career in New York theater. Herman, formerly an Algonquin Round Table habitué, New York Times and New Yorker theater critic, and playwright-collaborator with George S. Kaufman, never reconciled himself to screenwriting. He gambled away his prodigious earnings, was fired from all the major studios, and drank himself to death at fifty-five. While Herman drifted downward, Joe rose to become a critical and financial success as a writer, producer, and director, though his constant philandering with prominent stars like Joan Crawford, Judy Garland, and Gene Tierney distressed his emotionally fragile wife, who eventually committed suicide. He wrecked his own health using uppers and downers in order to direct Cleopatra by day and finish writing it at night, only to be very publicly fired by Darryl F. Zanuck, an experience from which he never fully recovered.

Drawing on interviews, letters, diaries, and other documents still in private hands, The Brothers Mankiewicz provides a uniquely intimate behind-the-scenes chronicle of the lives, loves, work, and relationship between these complex men.

In December, The Biographer’s Craft, the Biographers International Organization (BIO) newsletter, ran an interview with Sydney about the challenges she faced in writing the book and about writing biography in general.

MASTER CLASS AT THE 92Y: Click here to watch a 92nd Street Y program with Illeana Douglas, Alex Mankiewicz (daughter of Joe) and Sydney, discussing clips from Mankiewicz movies and behind the scenes stories about the brothers.

THE PARIS INSIDER:  Click here to listen to Sydney and Terrance Gelenter discussing Herman and Joe at Cafe Terrance in Paris.  Plus a surprise musical interlude, courtesy of Terrance.

A LIFE IN BIOGRAPHY: Click here to hear Carl Rollyson interview Sydney about The Brothers Mankiewicz and biography writing in general.

WRITERS CAST: Click here to read David Wilk’s review and listen to his interview with Sydney.

CLASSIC MOVIE MUSTS:  Click here to listen to Sydney talk with Max Baril about Joe’s A LETTER TO THREE WIVES on the ClassicMovieMusts podcast.

FILMWAX RADIO PODCAST: Sydney talks with Adam Schartoff about the contentious struggle over who wrote Citizen Kane, the devastating consequences of Cleopatra, and much more.

INKSLINGERS PODCAST:  Inkslingers interview biographers and memoirists about their writing process.  Here they discuss both Sydney’s Mankiewicz brothers book and her previous biography of Gloria Steinem.

FILM BUFFS FORECAST  PODCAST:  Australian critic Paul Harris interviews Sydney in a wide-ranging exploration of the Mankiewicz brothers, movies (theirs and others’), and the movie business, past and present.

Click here to hear a preview of The Brothers Mankiewicz new audiobook.

Long List: 2020 Kraszna-Krausz Moving Image Book Award celebrating outstanding and original publications that will have a lasting impact on their field.

AUDIOFILE  Review:  “A high point here is listening to someone talk like Bette Davis, without imitating her.”

SCRIPT MAGAZINE:   “Understanding Screenwriting: Generations:”  “one of the best of the recent biographies of screenwriters … One thing I love about her book are the footnotes that trace the lineage of some of the great Mank stories (“The white wine came up with the fish” and “Imagine that, the whole world wired to Harry Cohn’s ass”…) ” –Tom Stempel

SAN ANTONIO EXPRESS-NEWS:  See Sydney’s suggestions for films to watch at home.  “… a blend of Mankiewicz classics and some more recent films that connect to to them in some way. All are available to rent or purchase on digital streaming services.”

CITIZEN KANE Controversy — 80 years and still going strong:  Wellesnet sees a draft of the screenplay for David Fincher’s upcoming Netflix film, MANK,  and the controversy about who wrote CITIZEN KANE rages on.

@CriterionDaily:  January Books  “Let’s open this month’s round on new and recent books with an odd little news item. On January 7, Harvey Weinstein appeared at a court in Manhattan in the run-up to his rape trial carrying a copy of The Brothers Mankiewicz: Hope, Heartbreak, and Hollywood Classics. Why? “I can’t imagine his choice was unthought,” author Sydney Ladensohn Stern tells Variety’s Gene Maddaus, who notes that Weinstein was flashing a biography of Elia Kazan when he surrendered to police in 2018….   It’s possible, however improbable, that he may have been Googling himself one night and came across Stern’s brief piece for Air Mail about one of the worries tugging at her conscience as she began writing. “I didn’t need Harvey Weinstein horror stories to know I needed to dig deeply into the Mankiewiczes’ relationships with women,” she wrote in November, “but at the same time I dreaded discovering that either was actually a predatory monster.” Fortunately, neither was.”     –David Hudson

WALL STREET JOURNAL:  “A Steamroller and a Mensch”   “…beautifully researched and deftly structured … This model biography tells a story of two gifted brothers, only one of whom exceeded expectations.  But underneath the surface wit and brio, The Brothers Mankiewicz is a harrowing tale of a subtly lethal sibling rivalry that ultimately strangled them both.”    –Scott Eyman

COMMENTARY:  “All About the Mankiewiczes”  “She succeeds in keeping the narrative strands of their lives sufficiently separate to make for easy reading while simultaneously illuminating the instructive similarities in their personalities, both of which come through with lively clarity.  Above all, she tells their tightly entwined stories thoughtfully and well, with a sympathetic but honest appreciation of their talents–and limitations.”     -Terry Teachout

WELLESNET.COM:  “‘Brothers Mankiewicz’ looks at achievements, relationship of Hollywood siblings”  In an interview with Wellesnet.com, Sydney talks about who really wrote Citizen Kane, what Herman Mankiewicz thought about Orson Welles, and how Herman got along with his more successful brother, Joseph L. Mankiewicz.

AIRMAIL NEWS:  Sydney Stern on “Kane, Eve, and Cleopatra”  “The author of a new book on the Mankiewicz brothers reckons with an especially timely concern: Were her subjects predatory monsters?”

COMMENTARY:  “The Anti-Hitler Movie That Was Never Made.”  The fascinating tale of Herman Mankiewicz’s screenplay, “The Mad Dog of Europe,”  excerpted from The Brothers Mankiewicz.

MOSAIC  Editors’ Pick:  “How Cowardice and Anti-Semitism Stopped One of the Earliest Anti-Nazi Films From Getting Made”

MORE PRAISE & a note from Sydney:

The quotes below include a lovely tribute from a talented, accomplished, and generous colleague and friend, Patricia Bosworth, who died of COVID-19 on April 2, 2020.  Patti was yet another victim whose time should not have come so soon.  R.I.P., Patti and thank you.

“a fascinating dual portrait… also a thorough and judicious assessment of their extraordinary contributions to cinema.”
– Molly Haskell, film critic, author: From Reverence to Rape; Steven Spielberg: A Life in Films

“everything there is to know about the Golden Age of Cinema, as seen through the eyes of two amazing siblings… a generous, knowledgeable, fascinating account – I couldn’t put it down.”
– Patricia Bosworth, biographer of Montgomery Clift, Marlon Brando, Jane Fonda. Vanity Fair contributing editor